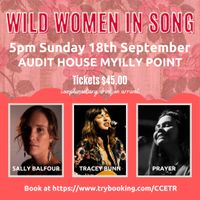 For aspiring songwriters and anyone who loves words and music, Wild Women in Song presents three Territory songwriters, established and emerging, performing a collection of diverse individual stories woven into one musical narrative.

For those of you unfamiliar with these incredible artists here's a bit more info:

As the daughter of Central Australian folk music royalty (Scott Balfour of 70’s folk group Bloodwood), it is little wonder Sally Balfour has found her way to the stage as a singer-songwriter. While the isolation and extremes of the NT loom large in her songwriting, Sally's music connects on an individual level. Through Sally’s deeply personal, acoustic guitar driven songs you're taken on the journey of one woman's life in Australia's outback. "Sally Balfour's voice has a resonance that just draws you in and keeps you captivated. Balfour is that special breed of folk singer who is able to entrance an audience with just a guitar and her beautiful voice” - Timber and Steel

21 year old singer-songwriter Prayer Corby grew up watching her dad play throughout the music scene in Darwin and has spent many years singing with him at family gatherings and gigs. After landing a scholarship with The Academy of Country Music, Prayer is stepping out on her own. Prayer has spent the last few years honing her skills singing BV's for acts such as David Spry, Constantina Bush and Shellie Morris, giving her the opportunity to perform on main stages at Garma Festival, Darwin Festival and Tamworth Country Music Festival, and has performed her own songs at Bassinthegrass and Seabreeze Festival.